Perl comes with a built-in command line debugger, but many people dislike it as it is not visual enough. There is the venerable Devel::ptkdb of Andrew E Page, but it has not been updated since 2004 and it requires Tk.

Enter the Devel::hdb written by Anthony Brummett and you get a nice web based debugger.

While developing a Perl implementation of a web API, I got some strange issues in LWP::UserAgent and thought I should try to investigate. So I wrote a small sample program and now I'd like to step through it.

Then run the script using the -d:hdb flag:

This will run the script via the Devel::hdb debugger. It will print to the console something like this:

so I turned my browser to that address: 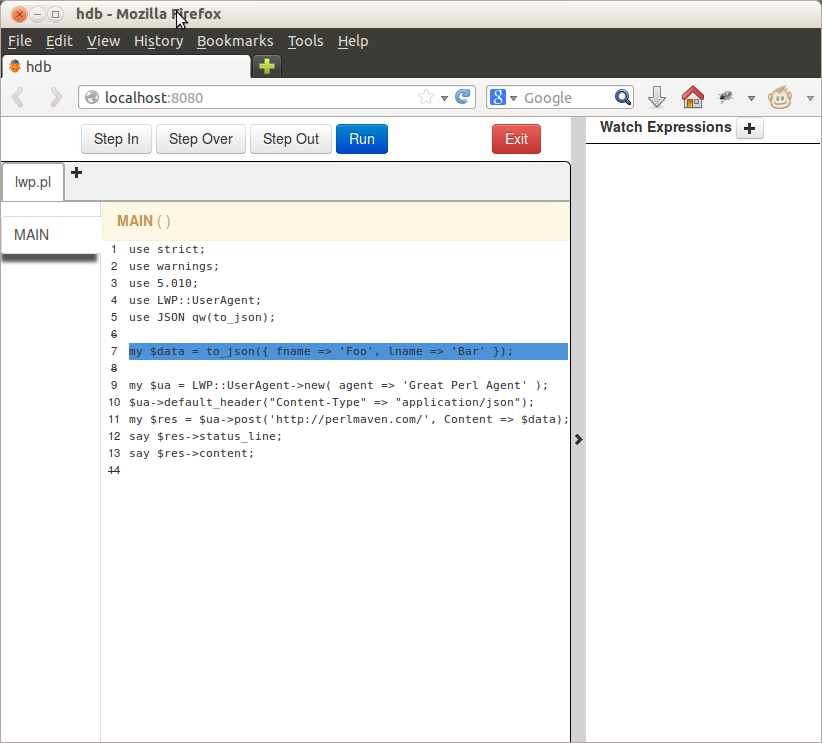 Step Over and Inspect variable

The first line is converting a Perl data structure to a JSON string, but that's not what I'd like to debug. So I clicked on the Step Over button at the top. This let perl execute the to_json function and stopped on the next line.

Once it stopped I could hover over the $data variable and see the content: 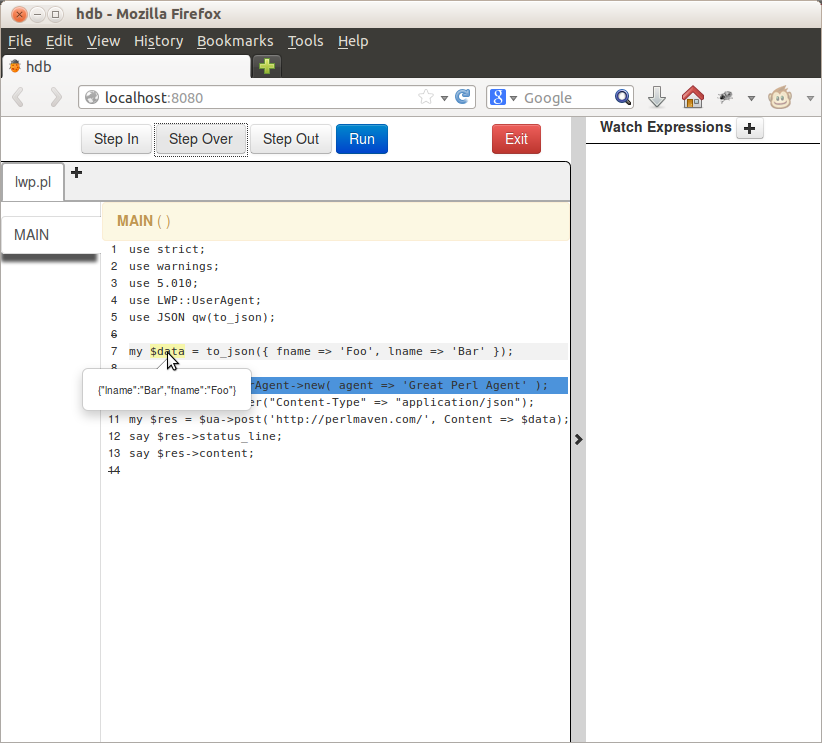 The next line my $ua = LWP::UserAgent->new( agent => 'Great Perl Agent' ); creates the user agent. As the problem I encountered was in the formation of the POST request I did not want to debug this line either so I clicked on the Step Over button again. I could inspect the resulting object in $ua, but the content was too big to be seen comfortably in the the pop-up data inspector and I knew I'll need to check this variable often. So I clicked on the + of the Watch Expression: + in the top right corner and typed in $ua. It immediately showed the content in the right panel.

For comparison I also hovered over $ua to show how that displays the content of the LWP::UserAgent object. 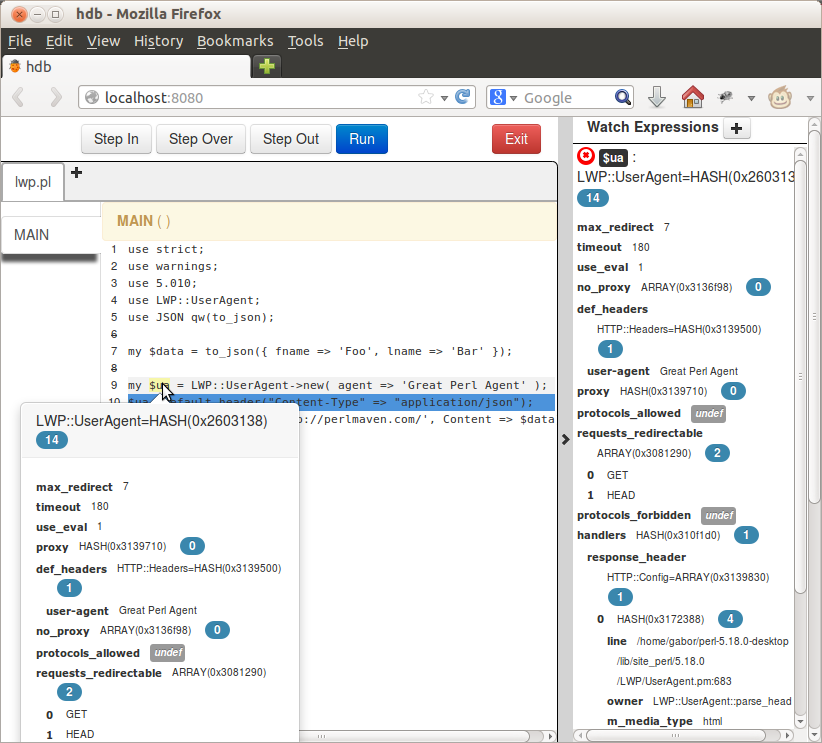 indicate the size of each data structure. (Number of array elements or number if pairs in hashes). They can be clicked to hide/show to content of the data structure.

Click on Step Over again and see how the def_headers section has been automatically updated on the right hand side.

The next line is where the debugging session gets interesting. So instead of stepping over the function, I clicked on the Step In button. The picture changed drastically: 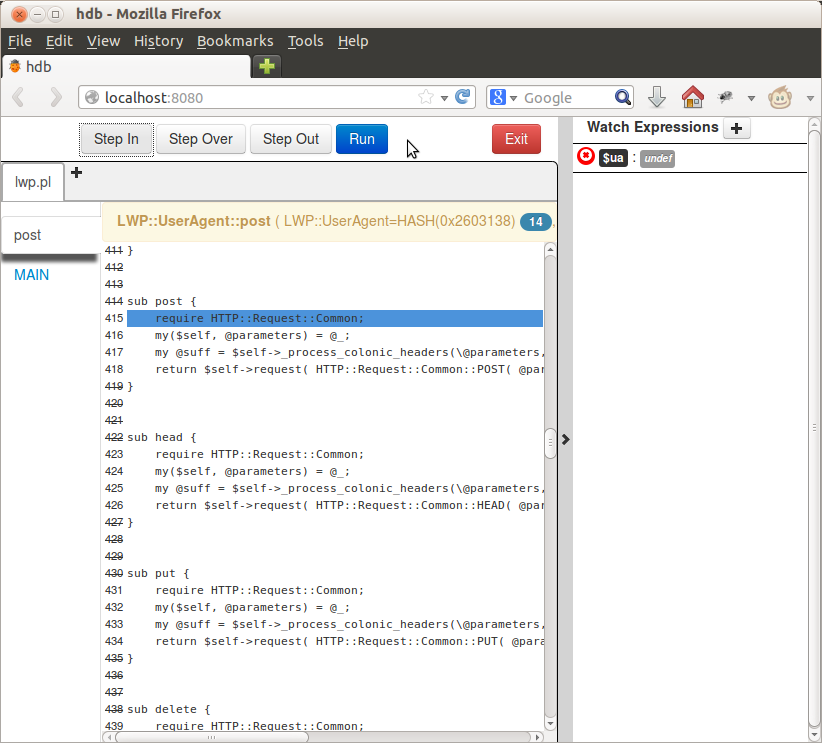 The content of the main panel was replaced by the source code of the post function of the LWP::UserAgent module, and the first statement in the function was highlighted. This is the next statement to be executed.

The $ua variable we have been watching on the right hand side now shows undef, because it went out of scope.

In the left panel we suddenly see the stack trace of our process. The lower entry MAIN indicates the main script and the post indicates the current function.

We could go on debugging this script, and showing some other fun features of the debugger, but I think this is enough for a first taste.

Devel::hdb can be found on CPAN and the source code is on GitHub waiting for you to fork and improve.