Using fork in Perl to spread load to multiple cores

If you have a big task to do that needs a lot of computation, but can be split up in several independent smaller tasks, you can reduce the overall execution time by spreading the work to several CPUs or cores.

On a Linux/Unix system this can be done using fork(). On Windows, fork() is emulated by perl and it might not fully work the same way.

When you call the fork() function of perl, it creates a copy of the current process and from that point on, there are going to be two processes executing the same script in parallel. In both "instance" of the script there will be all the variables that already existed in the original process, but there is no connection between the variables of the two processes. There is no direct way for one process to update (or even to check) the variables in the other process.

When we call fork() it can return 3 different values: undef, 0, or some other number.

It will return undef if the fork did not succeed. For example because we reach the maximum number of processes in the operating system. In that case we don't have much to do. We might report it and we might wait a bit, but that's about what we can do.

The variable $$ contains the Process ID of the current process. Let's see the following script:

If we runt this script we will get output like this:

There are a couple of issue we need to improve.

Let's see the next example:

There is also a variable called $name that had a value assigned before forking. If you look at the output below, you will see that the variable $name kept its value in both the parent and the child process after the fork, but we could change it in both processes independently.

The above code also has two calls to sleep commented out. They are there so you can enable each one of them separately to observe two things:

On the other hand, if you enable the sleep in the parent process only, then the child will exit long before the parent reaches the call to wait. So when the parent finally calls wait, it will return immediately and return the process id of the child that has finished earlier.

This is important, as this means the signal that the parent process received marking the end of the child process has also waited for the parent to "collect" it. This will be especially important in the next example, where we create several child processes and we want to make sure we wait for all of them.

In the $fork variable we count how many times we managed to fork successfully. Normally it is the same number as we wanted to fork, but in case one of the forks is not successful we don't want to wait for too many child processes.

As the child processes exit, each one of them sends a signal to the parent. These signals wait in a queue (handled by the operating system) and the call to wait() will return then next item from that queue. IF the queue is empty it will wait for a new signal to arrive. So in the last part of the code we call wait exactly the same time as the number of successful forks.

In the for loop, we called fork $n times. In the part of the parent process (in the if-block), we just counted the forks. In the child process (in the else-block) we are supposed to do the real work. Here replaced by a call to sleep.

I am sure you are also familiar with people who go to work and then sleep there...

The wait function will wait for any child process to exit and will return the process id of the one it saw. On the other hand there is a waitpid call that we don't use in our examples, but that will wait for the end of a specific child process based on its process ID (PID).

Lastly, let's see an example how we can spread load to several cores in your CPU. For this probably the best tool to use is the htop command in Linux. Please make sure you install it (yum install htop on Redhat/Fedora/CentOS, or apt-get install htop on Debian/Ubuntu). Then open a separate terminal and launch htop. At the top it should show several numbered rows. One for each core in your computer. The vertical sticks show the load. 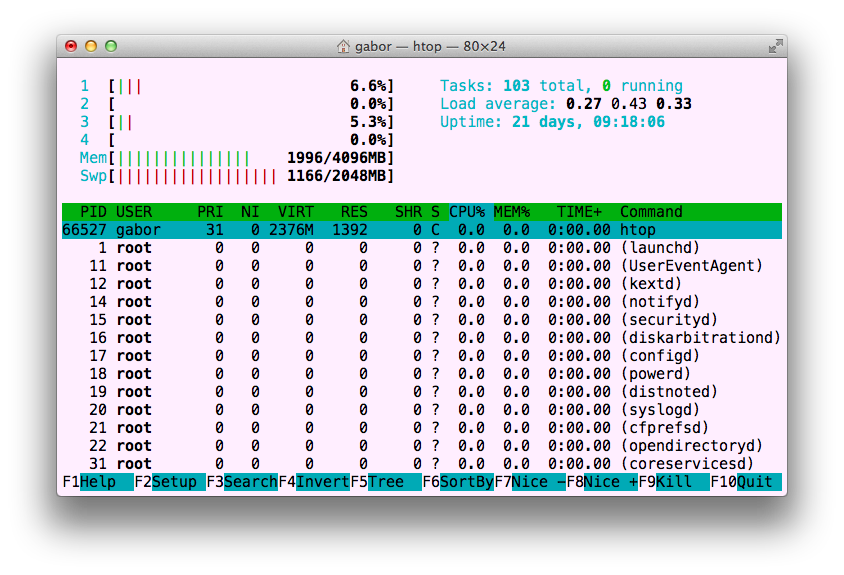 The following script is just testing if we can create load on several cores on the same machine. Tested on a MacBook htop showed 100% on all 4 cores.

The script will fork $n = 8 times. Each child process will run a loop 10,000,000 times generating and adding together two random numbers. Of course, we could have find some useful thing to do instead of just generating random numbers, but this is a simple way to create load on the CPU.

Run the script again and look at the output of htop:

All 4 cores are now filled with vertical sticks meaning all 4 cores have 100% CPU usage. 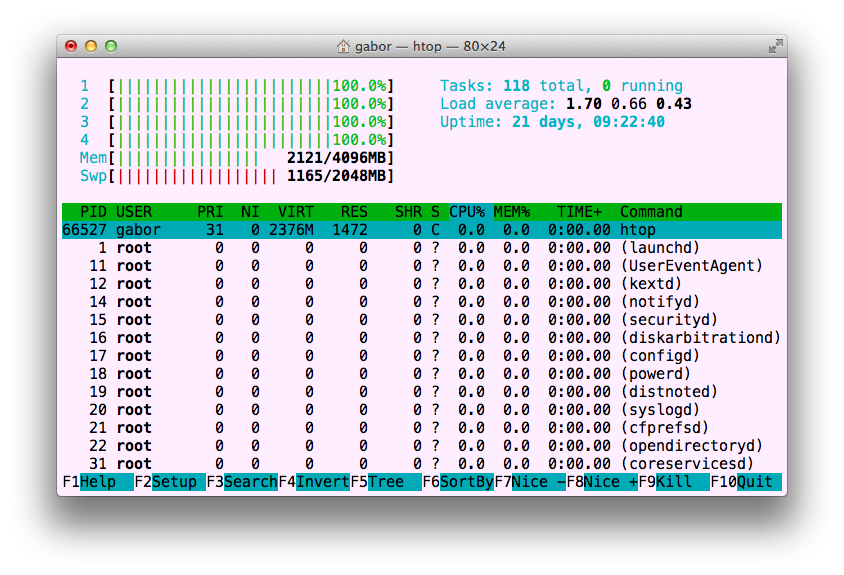 The big issue with forking is that once we forked, the two processes have no common variables. If the child process does something useful (as opposed to the above example) and wants to tell the parent process about the results it cannot do it directly.

There are several solutions to this, for example they can communicate via a socket. This will enable two way and long term communication, but it can be a bit complex. If we only want the child process to send the results back to the parent we can let the child save the results in a file and the parent can read the file after the child terminates.

We will see it in another article: Speed up calculation by running in parallel