Do you have an application that would benefit from posting status notes on a Twitter account? In this example we'll see how to configure your Twitter account to be able to do so, and how to write a Perl script to send the Tweets using Net::Twitter

The very first step is to create an account on Twitter and gain followers. We won't go in there as that is a whole other story. We'll assume there is already a Twitter account you control with plenty of followers you'd like to update.

Apparently we have to add a mobile phone to the Twitter profile before we can create an application.

Start by visiting the Application Management site of Twitter. If you are already signed in to Twitter it will show your avatar in the top right corner and will tell you that "You don't currently have any Twitter Apps.".

Click on the button that say "Create New App" and you will see a form: 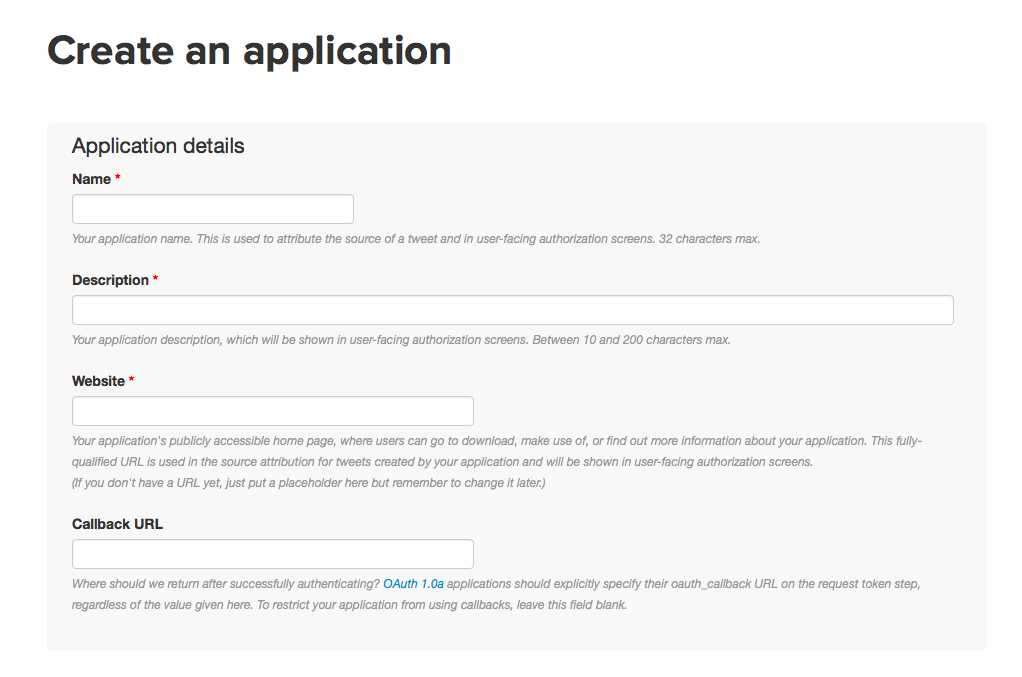 Fill in the form. I used the following:

Then I had to read the Developer Rules of the Road at the bottom of that page, click on the checkbox and press "Create your Twitter application".

Apparently the "Name" must be unique across all the applications in Twitter. 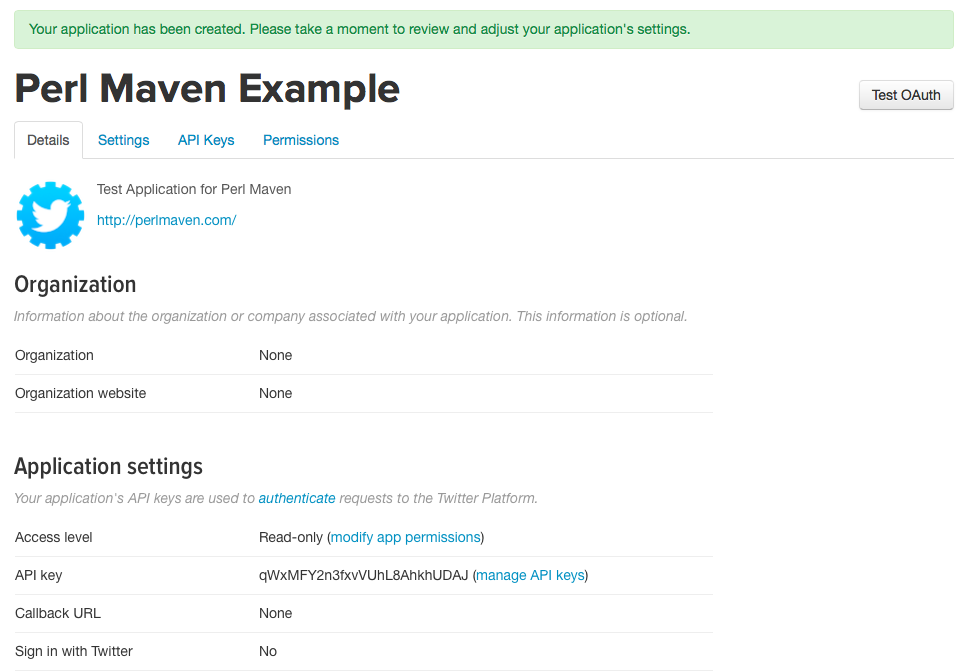 We need to click on the "API Keys" tab that will show both the API key and the API secret we need. 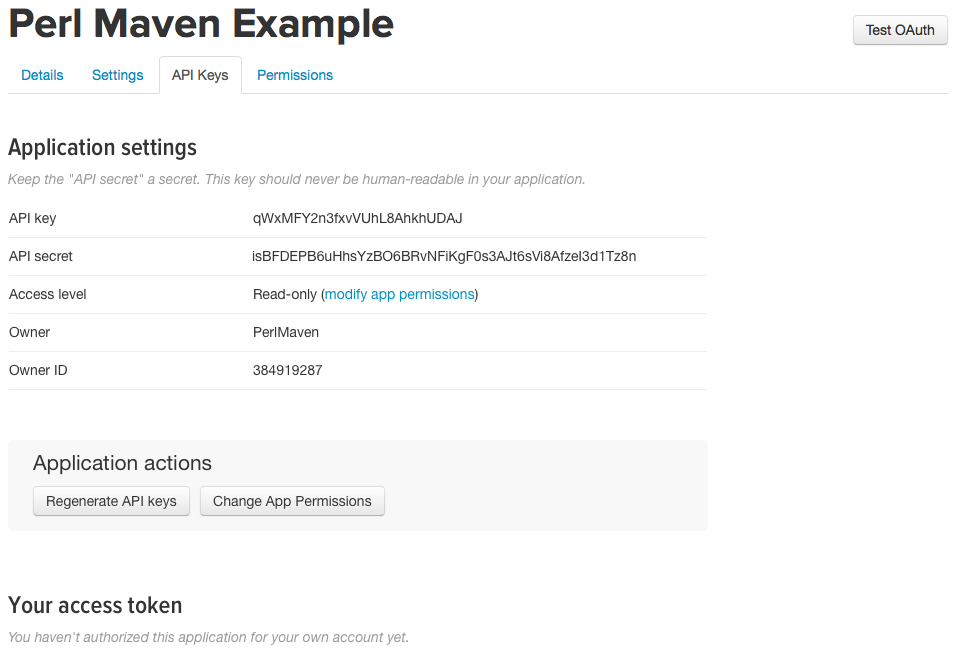 We need the values from both the API key and API secret fields. We could save them in the source code of our script, but for security reasons it is usually much better to save these values in a separate file. We certainly don't want other people to see our API key so if we want to distribute our application we would not want to include our API key. Even version control can be problematic. Our script is (hopefully) under version control that is pushed out to some server. It will be backed up. Who knows where these files might end up.

So we save these values in a file called .twitter in the home directory of our user account. Regardless of your operating system, this one-liner perl -MFile::HomeDir -E "say File::HomeDir->my_home" will print your home-directory.

The format I used to save the two values is like this:

It will take you back to the top of the same page showing the following:

After a few seconds I clicked on the refresh link and scrolled down the page to see the freshly generated access token:

The file with the data looks like this for me:

The first part of the twitter.pl script deals with the configuration parameters. We use File::HomeDir to locate the home directory of the current user in a platform independent way. It works at least on Linux/Unix/OSX/Windows.

The final step in this part of the code is the creation of the Net::Twitter object. We

Getting the latest posts

Before attempting to post, let's see the how can we fetch what others have posted.

home_timeline returns an array reference to hashes. Each hash represents a tweet. Each hash has several keys, for example text and user. The value of the former is a string, the content of the tweet, the value of user is a hash reference itself containing details about the user who posted this update.

If the text contains hashtags (words staring with #, or mentions other users by prefixing their name with @, or has a shortened URL (e.g http://t.co/jKxH3vWMuh ), then the hash also contains a key called entities that describe those special values. For example providing more details about other Twitter accounts mentioned in this update, or the original URL of a shortened URL.

print Dumper $r; can reveal all the details.

The next snippet will search for the string perlmaven and return the most recent tweets containing that string:

The search method returns a hash reference with two keys: search_metadata holds a few key/value pairs describing this search, statuses holds an array reference similar to the one returned by the home_timeline method mentioned above.

Unfortunately when we run the script, we get an error: Read-only application cannot POST. at...,/hl>

If we go back to web site where we created the application (or just look at the screenshots above) you'll see the application has Access level Read-only. Click on the Permissions tab to see

Select Read and Write and click on Update settings.

I got an error there:

I tried it, I even saw the mobile carrier I use listed there, but in the end I got an error Sorry, we don't have a connection to your carrier yet!. So I cannot change the permission of this application. I hope you will be able to do it.