Some times ago I have noticed that the Perl Maven site got slower. I thought it might mean I have outgrown the server. Or maybe the the new calls to the MongoDB backend are causing the problem. I even checked what would it cost to upgrade the Linode I have, but as I did not know what is the real source of the problem, I was not sure that would help.

The proper thing to do in this case is to try to find out what is the source of the long processing. In order to do that I wrote a small script that would load a single page. My site is using Dancer and it has an app.psgi file that could be used to launch Dancer via any PSGI compliant server.

I wrote a small program, similar to how a test-script would look like that loads a single page. (Just the HTML part.)

It loads the app.psgi file using do. As per the requirement of any such file, it returns a reference to a function that represents the application. Then we use Plack::Test to provide an environment for the application and finally we use the GET function of HTTP::Request::Common to send in a request.

Once the above program was ready I ran the Devel::NYTProf profiler with the following command:

This created a file called nytprof.out

which generated a beautiful HTML report.

That report clearly showed that most of the time was spent executing various functions of YAML.

I don't have a benchmark for YAML vs YAML::XS, but it seems to be obvious that the latter will be much faster. Just as JSON::XS is much faster than JSON

So I decided to give it a try and replaced YAML by YAML::XS in the whole code.

Though I thought they are fully compatible it turned out that there are several constructs that YAML allows and YAML::XS rejects. Luckily the tests I had complained. Then I spent about 2 hours trying to figure out the specific issues. The fix was easy, just locating the files was difficult. Maybe that too could be explained by the fact that I did this at 2 am after a full day of work.

Once I finished, I ran the profiler again and was happy to see the YAML calls are almost totally gone.

In the morning I've deployed the new version.

This is what the Munin graphs show half a day later: 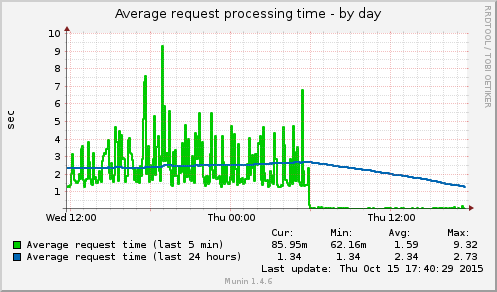 At the same time the CPU load also went down. 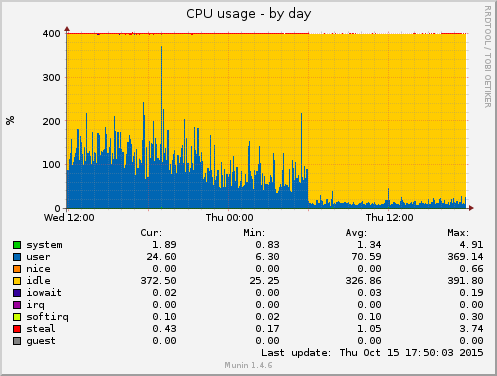 So based on this I won't need to upgrade the server any time soon, but probably more importantly, you the reader will get much better response time from the server.

In the comments, please wrap your code snippets within <pre> </pre> tags and use spaces for indentation. comments powered by Disqus
If you have any comments or questions, feel free to post them on the source of this page in GitHub. Source on GitHub.