Implementing a Markua Parser in Perl 5

Test coverage report with Devel::Cover for the Markua Parser

Coveralls indicates a test coverage of 96.88%, but it does not seem to take in account the branch and conditional coverage cases.

Let's see what does Devel::Cover on its own can tell us.

Luckily we have set up our code as a CPAN module and that way we can use the common method to collect test coverage data. We run:

We can already see the summary of the coverage report, but let's look at the HTML version of the report.

When I open the html file in my browser I saw the following: 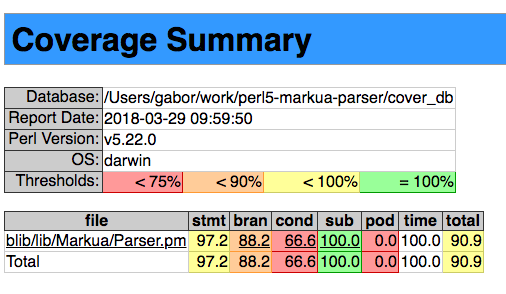 To have a reasonable expectation most companies I visit need to work hard to reach even 30% statement coverage. Even open source projects usually have much lower test coverage than this one. On the other hand we don't have a lot of code yet and we tried to be conscious about testing. So that 66.6 worries me a bit. Let's drill down.

Clicking on the filename we get to another report in which we can see the content of the whole file and line-by-line we can see which line was executed and how is the branch and condition coverage wherever they are relevant.

I've scrolled down to the area where we just added the new code:

This is a list of all the places where there are 2 branches. An if side and an else side. Even if one of the sides is not implemented and thus can be considered explicitly empty.

If you look at line 107 you will see two important things:

One that the line that in code looks like this:

Is now represented as this:

They have the exact same meaning, but I don't think this change during the reporting is helpful.

Besides that personally I have a hard time dealing with unless statements, but that's a separate issue.

The second, the important thing is that we can see a green T and a red F next to it. That indicates (at least to people who are not color-blind for red-green) that during the test running there was at least one case in which the expression was True and it was never False. The full code looks like this.

The meaning of that report is that the if-block was executed during the tests (at least once), but the invisible and therefore implicitly empty else-block was never executed.

This is where the branch coverage can provide finer report that statement coverage. In this case all the statements in that area were executed. What was not tested, was the case where some of the statements do not need to be executed.

This, together with 3 other red boxes in the "Branch Coverage" report indicated the 4 cases where we could add more tests to cover these other cases as well. 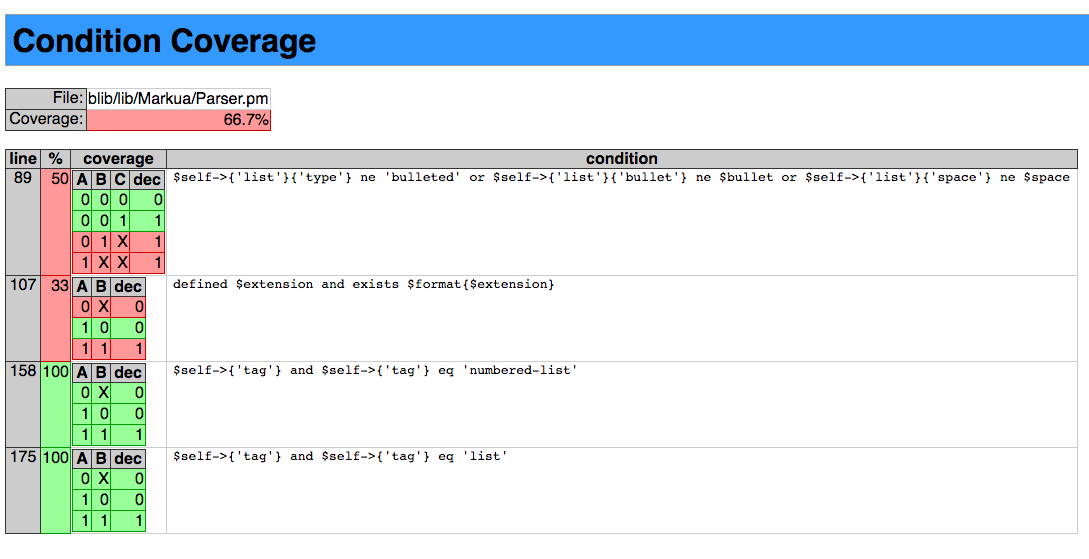 A simple and or or statement can be True or False in 3 different ways. This is what is represented in the these tables. (The first one has 4 lines as it is a combination of two or statements.) In the section about line 107 we can see that out of the 3 cases only one of them is green, the one where A=1 B=0 and therefor dec=0. this is when our reversed expression

will be True. That's when we execute the if-block. The other two cases were not executed. If you remember we had 3 cases and only one was tested.

The calculation does not really matter, what matters is that now we have a much better idea which parts of the code is not tested and which conditions might need to be fulfilled. Then we can go and prepare test-cases that will exercise that part of the code.

We did not change any code now, but Devel::Cover created a directory for the report. We would like to make sure that directory is not added to GitHhub. So we added its name to the .gitignore file.