Perl::Critic has many policies, but there are several additional modules that provide even more policies. For example the Perl-Critic-Nits distribution provides the ValuesAndExpressions::ProhibitAccessOfPrivateData policy that if violated would generate a message like this:

Unfortunately the this generates a lot of false positive reports.

I think the most problematic part is that Perl::Critic, being a static analyzer, cannot know if $h in a code snippet like this: $h->{name} is going to be a blessed object or a plain hash reference. So the policy will report violations for plain hash references as well.

Another issue might be in classic OOP where at least the accessors will need to access the attributes as elements of a hash reference.

You can avoid the policy violation report by putting a comment on the line where you know it is ok to access the element of a hash reference:

If the code is primarily object oriented, especially if it is based on Moo or Moose, where you don't write your own accessors, then this policy can catch code that violates the encapsulation. 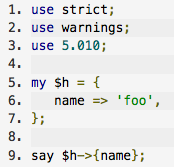